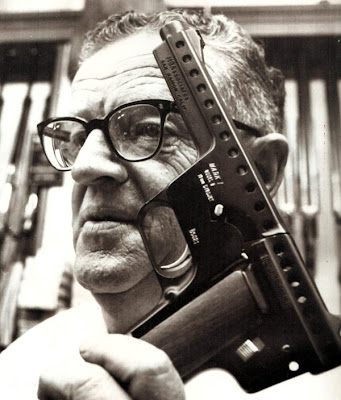 "San Jose, Calif., April 15 - SAYS RUSSIANS WANTED TO BUY GYROJET GUN -- Frank Schilling, San Jose gunshop owner, displays a revolutionary new type pistol which he told police two Russian military attaches tried to buy. Schilling said he rejected the offer, but sold the two some ammunition for the weapon. Instead of using the customary gun powder, the bullet is propelled by solid missile fuel. The Russians were identified as Col. Useolad Stepanovich Tovna and his aide, Col. Nicolai A. Burmistvro. Efforts to contact them in Washington failed." April 16 1966

I don't know why this guy sold those commies anything. I doubt they even wanted the gun much, probably wanted the missile fuel formula more. It would have really been great if we had sold them on the idea of the Gyrojet. If we could have armed the Soviet military with them maybe the cold war would have ended that much sooner ...
Posted by Wilson at 5:59 AM
Email ThisBlogThis!Share to TwitterShare to FacebookShare to Pinterest
Labels: People With Guns, Photography - All, Semi-Auto Pistols, U-Tubez

The Gyrojet was an interesting concept with some (at that time) insurmountable flaws.