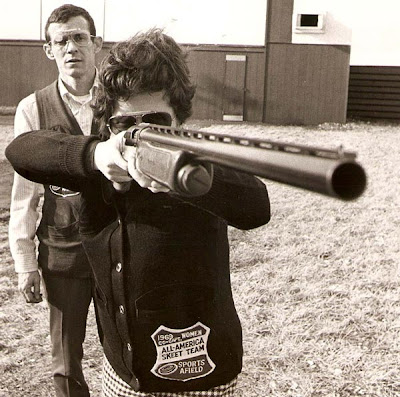 "A FAMILY HOBBY - ST. LOUIS: 'Women will never be as good in shooting as men,' says Mrs. Sallie Durbin who in 1968 defeated all male competitors and tied a world's record for women in the St. Louis state skeet shooting competition for .410 bore guns. She first saw shooting as an activity to divert her husband from go-kart racing. Sallie and her husband John hold several world skeet shooting records and recently held the world husband-wife team title. They praise the sport as a great family hobby." 2/4/1970
Posted by Wilson at 1:16 AM No comments:
Email ThisBlogThis!Share to TwitterShare to FacebookShare to Pinterest
Labels: People With Guns, Photography - All, Shotguns

Funny how the mind works

Was driving in rush hour traffic early this AM and listening to the oldies channel when Stuck in the Middle with You started playing. I grew up in the 1970s and must have heard that song at least 10,000 (mild exaggeration) times as a kid. I like the tune and if anything you would think it might bring back fond memories from my childhood. But thanks to one particular movie all that comes to mind when I hear it now is some poor cop getting his ear cut off by a maniac.
Posted by Wilson at 4:42 PM 1 comment:
Email ThisBlogThis!Share to TwitterShare to FacebookShare to Pinterest
Labels: Livin' in the 70s, Movies, Odds and Ends

To all the Dads out there... 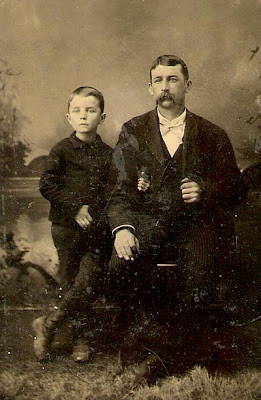 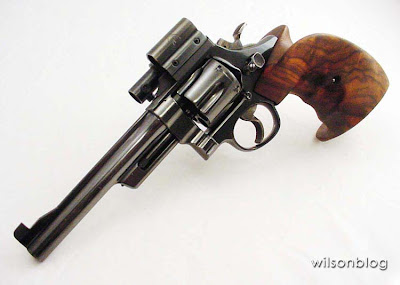 The aptly named Smith & Wesson 1950 .45 Target Model was chambered in .45 ACP (with a small number produced in .45 Colt) and with its 6-½ inch barrel, Patridge front and adjustable back sights it was well suited to the task. But it seemed shooters preferred a heavier barrel gun for target or competition use. S&W would give them what they wanted with the Model 1955 (later Model 25), which was basically the same design but with a heavy contour barrel. Although the 1950 .45 Target would stay in production (as the Model 26) until 1961 sales were never spectacular with only 2768 reportedly made in the eleven year run.

I purchased this Model 1950 "Pre 26" in early 2000. Having left the factory in 1955 it had just turned 45 years old and by that time this fine old revolver had been modified just as you see it. Reportedly it had belonged to a competition shooter in Florida and the gun's alterations would seem to support that. The modifications included action work, oversized grips and the removing of the standard back sight and replacing it with an optical one. This sight is an illuminated (no batteries needed) cross hair type produced by Thompson Center and together with the action work makes this gun exceptionally accurate. This revolver is more than capable of cutting one-hole groups all day long. The double action trigger pull is lighter than stock but it was really intended to be fired single action and that has been brought down to a very light 2 ¼ pounds. With the crisp trigger, heavy frame, hand filling grips and long barrel it is a true pleasure to shoot.

I didn't own this very long the first time before stupidly selling it to my brother, a decision I regretted for quite a while. After several years of my relentless pestering he eventually sold it back and now it has become part of my "permanent" collection. I don't normally name my guns but if I did I think this would be something like "The Smith & Wesson Model 1950 Buck Rogers Commemorative Edition." It just looks like it belongs in one of those Buck Rogers or Flash Gordon serials, or maybe if they brought back Firefly to TV. If they did that I would gladly loan them this revolver for the duration, free of charge... 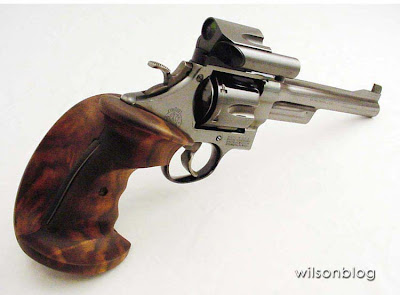 Posted by Wilson at 7:26 AM 9 comments:
Email ThisBlogThis!Share to TwitterShare to FacebookShare to Pinterest
Labels: From the vault, Revolvers, Smith and Wesson Revolvers

Well, not "good" but you might want to read THIS if you're worried about the future of this nation. Thanks to SurvivalBlog for the link.
Posted by Wilson at 4:23 PM No comments:
Email ThisBlogThis!Share to TwitterShare to FacebookShare to Pinterest
Labels: Prepare, TEOTWAWKI

Chapter Eleven has now been posted and it's the longest chapter to date. Have you noticed that each new chapter gets a little bit longer than the last?
Posted by Wilson at 2:26 PM 2 comments:
Email ThisBlogThis!Share to TwitterShare to FacebookShare to Pinterest
Labels: My Fiction

Question for the Gunnies

Do you have a gun related log? If so, how detailed is it? I do, I keep a "Gun Journal" and I'm willing to bet a lot of my fellow gun owners do to. Mine is just a simple Word document. In it I record the guns I buy (by model and serial number) including purchase price and any other pertinent details I might have at the time. Like if it's an antique I might record the year it was made or basic condition, if it's all original etc. I also record when they are sold with price and purchaser listed. Additionally, any time the gun leaves my possession (like for custom or repair work) I note precisely when it left and when it returned, as well as the cost of the work done. Lastly, when I go shooting every gun taken is recorded with the exact number of rounds fired and if any malfunctions were experienced. Including the cause of the problem if I know it. Am I the only obsessed "gun nut" doing this? I doubt it, in fact there's probably some reading this that make my efforts look crude.
Posted by Wilson at 10:59 AM 9 comments:
Email ThisBlogThis!Share to TwitterShare to FacebookShare to Pinterest
Labels: Gun Miscellaneous, Gun Nut, Question for the gunnies
Newer Posts Older Posts Home
Subscribe to: Posts (Atom)