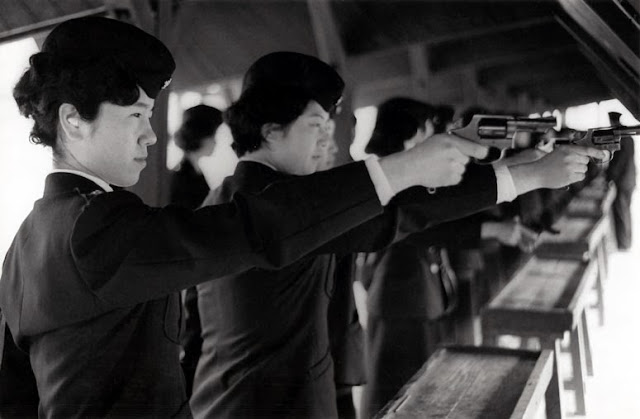 JAPAN - POLICEWOMEN - While no decision has been made to arm the policewomen or not, they have undergone revolver training at the shooting range, and are prepared to go armed if required. 3/68

Posted by Wilson at 7:00 AM No comments:
Email ThisBlogThis!Share to TwitterShare to FacebookShare to Pinterest
Labels: People With Guns, Photography - All, Smith and Wesson Revolvers 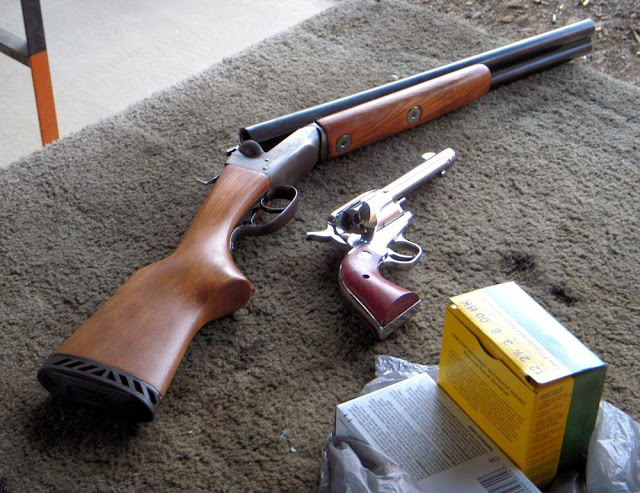 It's been a long miserable winter but I think we are finally nearing the end! Yesterday, I went shooting for the first time this year. The only available range nearby is outdoors and since December every time I wanted to go there would be more rain or snow. I don't mind going shooting when it's cold but I hate when there's 2 inches of mud on the ground.

The first was a Ruger Vaquero chambered in .45ACP and the second an old 12 gauge Stevens 311 double barrel that someone shortened to near the legal limit (18 ¼ barrel and 31 inches overall). I traded both from my brother a while back and had to find out if either was a "Keeper." I didn't think the shotgun would be but I had to at least shoot it first to be sure.

Both guns functioned perfectly, no problems in that department. The Ruger however was shooting about 2 inches left for me. Also, because of the grip's shape and their smooth wood construction the Vaquero had a tendency to try rolling out of my hand under recoil. I did not like that at all.

The Stevens, with its shortened barrel and cut down stock, looks like it would be quite unpleasant to shoot. With normal defense loads I'm sure it would be but yesterday I brought a light load that tamed the old gun some. I used Remington reduced recoil LE rounds (RR12BK8-00). They consist of 2 ¾ shells loaded with 8 pellets of 00 (1 ounce) with a muzzle velocity of 1200fps. Supposedly it has 40% less recoil than standard 12 gauge buckshot. They did make shooting this sawed-off somewhat enjoyable. I put 25 rounds thru it yesterday and my shoulder isn't sore at all. These rounds are definitely great for practice and I'm sure people of smaller stature (or with physical impairments) would find them very beneficial. For home defense though I think I might want the hotter stuff.

I was the first on the line when they opened yesterday but I wasn't alone very long. Two younger guys with their ARs and Glocks were about ten minutes behind me. I must have looked like an illustration out of a history textbook with my old double barrel and single action revolver! I saw that one of the guy's Glock was highly modified and after he noticed me eyeing it he let me have a better look. It was a Glock 21 that was customized by Cold Bore Customs. Exploring their website it appears they have made a nice business for themselves reshaping polymer framed pistols. I must say they did a good job on this one I examined. I've owned two Glock 21 pistols over the years and the size and shape of the grip frame was my only complaint about them. This 21 actually felt good in my hand. IF I was ever going to own another full size Glock I would definitely consider having this company whittle it down for me.

All in all I had a great morning shooting. Maybe I'll make it a regular thing from now on!
Posted by Wilson at 7:00 AM 2 comments:
Email ThisBlogThis!Share to TwitterShare to FacebookShare to Pinterest
Labels: Glock, Gone Shooting, Revolvers, Ruger, Shotguns
Newer Posts Older Posts Home
Subscribe to: Posts (Atom)