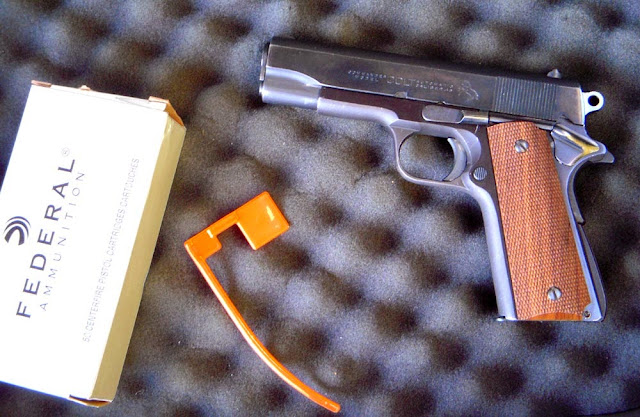 I went to the range first thing this morning, but only stayed a short while. Last month I bought a 1965 vintage Colt Lightweight Commander (45 ACP) and I wanted to give it a quick test drive.

I didn't bring much ammo with me. As I said, I didn't want to stay very long, just long enough to see if this old Colt had any major issues.

I put a 50 round box of Winchester ball (230gr) ammunition thru it without a problem. I then tried some Federal "Hi-Shok" 230gr hollowpoints in it and experienced 2 FTF malfunctions (out of 20). The Federal stopped about halfway in but with a gentle push on the slide it fed the rest of the way. The recoil spring seemed strong enough so it's probably the feed ramp that is at issue. I've had older Colts like this before with the same problem. Since this was made before hollowpoint bullets became popular I really can't blame the gun.

I've had several old Colts that acted the same way, including a 1953 Government Model that I have carried for years. If the profile of the bullet is too flat they just won't feed without modifying the feed ramp. My '53 will load hollowpoints with a more rounded bullet design like the Remington Golden Saber. I expect this Commander will act the same.

Accuracy seemed average for what it is. The stock Colt sights aren't the easiest to hit with. This Commander recoiled more than I anticipated though. I been using steel frame 1911s for years. I wasn't used to this much snap.

This is a nice little Colt but I haven't decided if I'm going to carry it or not. If I was going to carry it regularly I would have to put better sights on it and correct the feeding issue, modifications that would destroy the collector's value of this pistol.
Posted by Wilson at 11:00 AM No comments:
Email ThisBlogThis!Share to TwitterShare to FacebookShare to Pinterest
Labels: 1911, Colt, Concealed Carry, Gone Shooting

Posted by Wilson at 7:00 AM No comments:
Email ThisBlogThis!Share to TwitterShare to FacebookShare to Pinterest
Labels: Flashback, Movies, Music, Retro Pop (Culture), U-Tubez 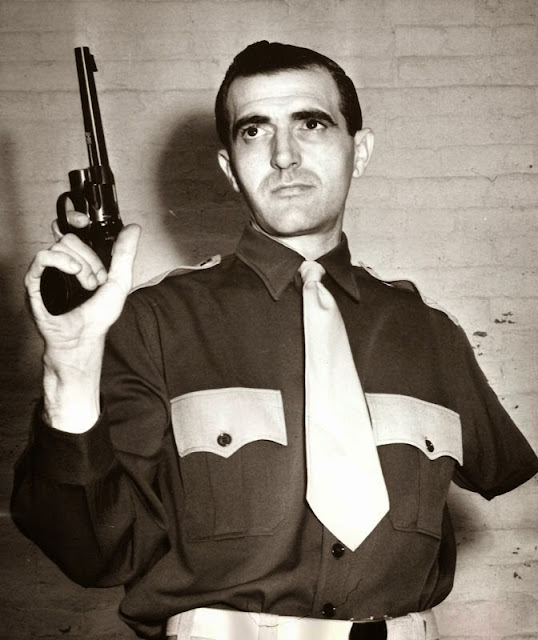 DISABLED ARE ABLE SHOOTERS - Cincinnati, Ohio: Despite the loss of an arm and leg in the war, Charles Girard is an expert marksman and a crack member of the Disabled American Veterans National Headquarters Pistol Team. Girard is a DAV national service officer. The team has won numerous honors in local and national competition. 10/3/50
Posted by Wilson at 7:00 AM No comments:
Email ThisBlogThis!Share to TwitterShare to FacebookShare to Pinterest
Labels: Colt, People With Guns, Photography - All, Revolvers

I just finished another stint of jury duty. Supposedly the entire selection process is completely random, but when your name comes up three times in ten years you have to wonder, especially when many of your fellow jurors had similar stories. I know people that have lived here their whole lives without ever being called. The only good news is that here in my county jury duty is two weeks while in most of Kentucky it is a month. In one county I believe it's actually six months. Well, I can stop worrying about it for a while, by law they can't hook me again for at least two years.
Posted by Wilson at 7:00 AM 2 comments:
Email ThisBlogThis!Share to TwitterShare to FacebookShare to Pinterest
Labels: Odds and Ends

Halloween is coming up ...

I thought you might enjoy THESE haunted house photos (funny - not scary).
Posted by Wilson at 7:00 AM No comments:
Email ThisBlogThis!Share to TwitterShare to FacebookShare to Pinterest
Labels: Photography - All, Photography - People
Newer Posts Older Posts Home
Subscribe to: Posts (Atom)