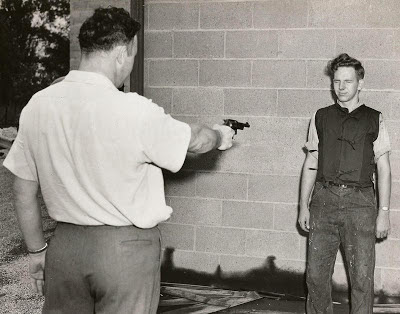 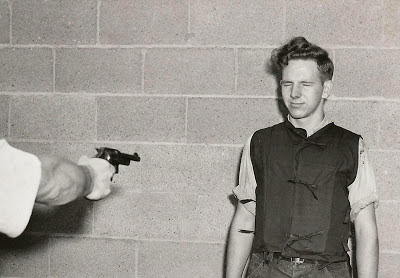 "COURAGE, YES, BUT NOT TO LOOK - DETROIT: Arthur Greer, Plastic Technician, knows the new 'Doron' bullet-proof vest he wears will stop the bullet fired at him at close range, but the knowledge doesn't preclude operation of reflex action in his eyes. The vest, a development by the Paramount Rubber Co. of Detroit, of body armor used by the Army and Navy, is made of layers of fiber glass. It is guaranteed to stop all ammunition no heavier than the 38/44 S&W Special." 9/17/47

What a way to make a living! I wonder how many years you had to put in as a 'Plastic Technician' before you got to be the one shooting the gun.

Posted by Wilson at 12:00 AM 2 comments:
Email ThisBlogThis!Share to TwitterShare to FacebookShare to Pinterest
Labels: People With Guns, Photography - All, Revolvers, Smith and Wesson Revolvers 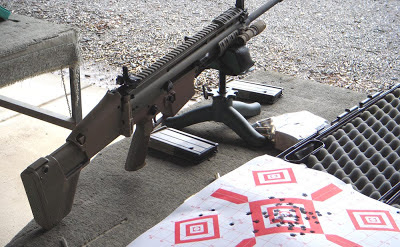 Well it took six weeks but I finally got to take my SCAR 17S to the range. We've had wet weather the last three times I wanted to go shooting. It was still a little wet today from some snow two days ago, but dry enough. I couldn't wait any longer. I have several guns that I need to shoot but the SCAR was the only one that went. I had to know if it was a 'Keeper' or not. I won't keep you in suspense, it most definitely is!

This morning I ran a mix of various 7.62 NATO through the rifle. I brought along some 1980s British surplus. As well as some 1990s German surplus and Cavim. From my newer stock I brought Winchester and Prvi Partisan brands. I fired 180 rounds without a single malfunction. The rifle performed flawlessly right from round one.

Today I used the factory iron sights at a distance of 50 meters and firing from a rest. Once I got used to the sights I could easily keep my shots in a 5 inch square even when I picked up the pace some. Numerous times shots were less than an inch apart, which brings us to the only flaw in the SCAR, the trigger. According to my trigger scale mine comes in at a gritty 7.5 pounds. I believe this rifle would easily be capable of sub MOA accuracy with a better trigger. That is the next thing on my list.

The muzzle brake tames the rifle quite a bit but does make it LOUD. When I got to the range the only shooters there were two elderly gentlemen at the far end puttering around with their .22s. I purposely went to the opposite side putting as much distance as I could between us (about 50 feet). It didn't help much though, after about 40 rounds through the SCAR they packed up and went home. Sorry guys!

Now that I have actually shot the SCAR I can say that all the accolades are true. It is light weight and easy to control, despite the heavy cartridge it fires it is a ball to shoot. This rifle is everything its proponents say it is, and now you can count me as one of them. I am another true believer!
Posted by Wilson at 2:13 PM 3 comments:
Email ThisBlogThis!Share to TwitterShare to FacebookShare to Pinterest
Labels: Gone Shooting, Rifles, SCAR

Stolen from Uncle, but it's so great everyone needs to link to this. How you like your magazine ban now? "Tastes like Dianne Feinstein's lunch."