Posted by Wilson at 7:00 AM No comments:
Email ThisBlogThis!Share to TwitterShare to FacebookShare to Pinterest
Labels: Flashback, Livin' in the 70s, Movies, Music, Retro Pop (Culture), U-Tubez

Why do I want this?


Because it's AWESOME!
Posted by Wilson at 3:26 PM No comments:
Email ThisBlogThis!Share to TwitterShare to FacebookShare to Pinterest
Labels: ME WANT, U-Tubez 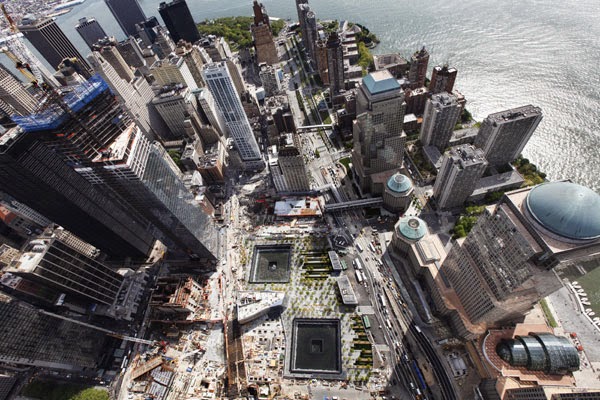 Posted by Wilson at 8:46 AM 1 comment:
Email ThisBlogThis!Share to TwitterShare to FacebookShare to Pinterest
Labels: In Memory

Check out THIS site. It has over 170,000 images from 1935 to 1945. One really nice feature is that you can go to the interactive map and actually search for photos from your area of the country, right down to the county you live in!
Posted by Wilson at 7:00 AM 2 comments:
Email ThisBlogThis!Share to TwitterShare to FacebookShare to Pinterest
Labels: Photography - All, Photography - Other 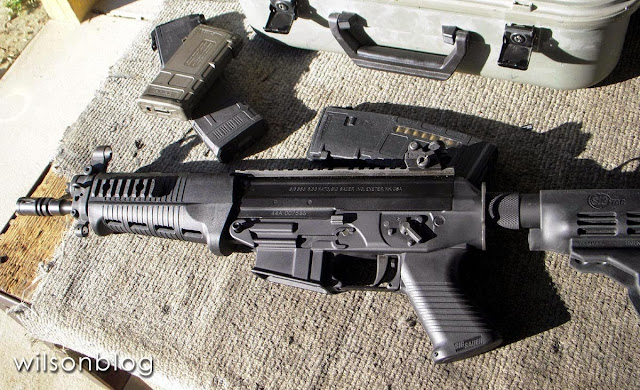 I went to the range this morning. Perfect shooting weather, 65 and sunny. I've wanted to get my "new" Sig Sauer 556 pistol to the range since I bought it in July. I also had a Magpul 40rd magazine I recently bought and wanted to test too.

I brought along Winchester and Federal (55gr) and Federal (62gr) 5.56 ammunition as well as three sizes of Magpul mags. I should have brought some GI mags to test with it but forgot them. It'll have to wait until next time.

I started out the session by zeroing the gun. It was shooting a couple inches to the left for me but it was an easy fix with the Sig Diopter sight. After that, I shot 30 rds thru the pistol WITHOUT using the brace. I wanted to get a feel for how it handled when you didn't use it. I spent the rest of the time firing from a standing position while shouldering the brace.

Most of my firing time was with a standard USPSA/IPSC target. All shooting was at 25 yards.

There were no great revelations this morning; everything was just as I assumed it would be. Firing unsupported my groups were easily 2.5 times what they were when I shouldered the brace. They looked like a shotgun pattern, all over the "A" and "C" zones. Rapid fire (with any kind of accuracy) was nearly impossible.

The groups tightened up considerably when I used the brace. I was easily able to keep my shots in the big "A" zone. With a lot of concentration I could even keep my shots in the small "A" and the "B" area. The Sig has a 2 stage trigger that is a little on the heavy side with a lot of takeup. It is not match quality but once you get used to the feel it is more than adequate.

The gun ran flawlessly. I fired 140 rounds thru three different magazines without a malfunction. This gun really throws the brass though, about 25 feet at the 2 O'clock position.

As you would expect, muzzle flash and recoil with the 10-Inch barrel was greater than a carbine length one. But it was controllable even in rapid fire. That short barrel heats up real fast though!

The only downside this morning was that after I finished shooting I noticed the flash hider (appears to be a standard AR-15/M16 type) had come loose. I not really sure it was on there right to begin with.

I think I can say with some certainty that this Sig pistol is a "keeper" - as it is. But if the laws were to ever change and you couldn't have the brace I don't think I would want it. The thing is just a monster without it.
Posted by Wilson at 2:01 PM 2 comments:
Email ThisBlogThis!Share to TwitterShare to FacebookShare to Pinterest
Labels: Gone Shooting, Semi-Auto Pistols, Sig Sauer 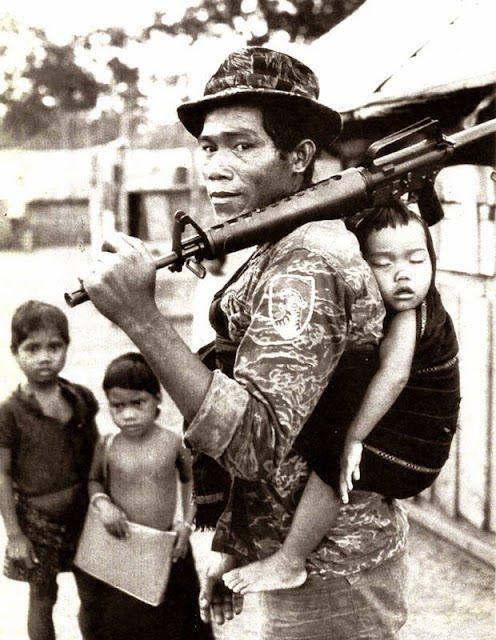 MORONG, PHILIPPINES: The Montagnards, the fiercely independent tribesmen of Vietnam's Central Highlands who fought the communists in the jungles of Cambodia and Vietnam, recently decided to abandon their struggle and seek new lives in the U.S. In this 1969 photo, a Montagnard tribesman heads for his guard post at Tieu-Altar, South Vietnam with his baby strapped to his back. Sept 1 1986
Posted by Wilson at 7:00 AM 1 comment:
Email ThisBlogThis!Share to TwitterShare to FacebookShare to Pinterest
Labels: People With Guns, Photography - All, Rifles
Newer Posts Older Posts Home
Subscribe to: Posts (Atom)