Posted by Wilson at 3:00 PM No comments:
Email ThisBlogThis!Share to TwitterShare to FacebookShare to Pinterest
Labels: Funnies, Music, U-Tubez 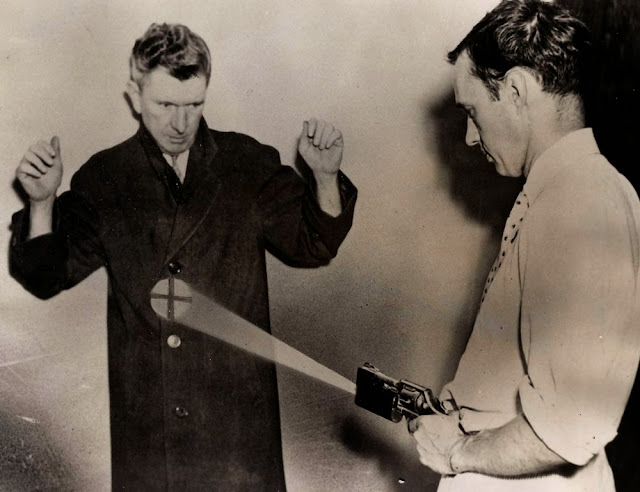 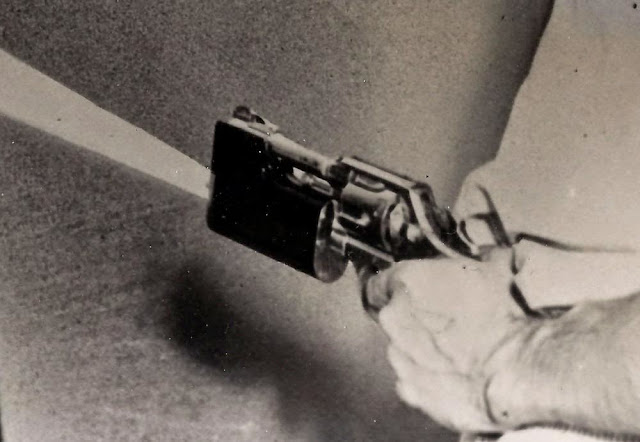 LIGHT BEAM AIDES POLICE OFFICERS - DETROIT, MICH. - G. Howlett Davis of Detroit (Right) demonstrating a device he has invented which when attached to the barrel of a revolver projects a beam of light that illuminates a small area into which bullets fired from the revolver will hit. This device is expected to be of great use to policemen hunting fugitives or armed criminals in dark places, for once the beam of light picks up the target it can be held and the bullets placed in it. Emerson Osborn is acting as target. This light beam is effective up to 50 feet. 8-20-40
Posted by Wilson at 7:00 AM No comments:
Email ThisBlogThis!Share to TwitterShare to FacebookShare to Pinterest
Labels: People With Guns, Photography - All, Revolvers 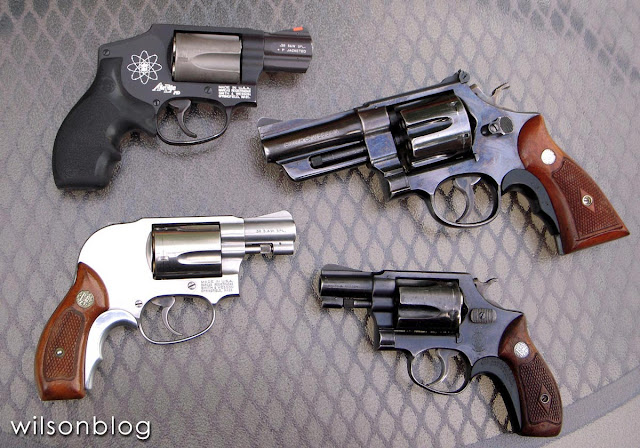 One year ago today I began using only double action revolvers when I carried concealed. No doubt long time readers of this blog will know I am a fan of S&W revolvers. I have carried them for many years now, but never exclusively. I thought I would give it a try.

I don't have any grand revelations for you. Carrying these revolvers wasn't much more difficult than the autoloaders I have carried for years. Yes, the big Smith was a bit more cumbersome but nothing that couldn't be done regularly. In no way did I ever feel that I was somehow "undergunned" when carrying revolvers. I never felt I was short changing myself.

I found the main difference was in carrying the reloads. I always like at least one reload with my carry gun and that's where the disparities between autos and revolvers really started showing. Typically I will carry my reloads in a front pants pocket. I've found that even a large capacity magazine in your pocket isn't too difficult to deal with, on the other hand revolver speed loaders, if carried loose, can become quite the chore.

I used both speed strips and speed loaders. The strips are of course much easier to carry on you but slower to use. The speed loaders are much quicker for reloading but more of a hassle to carry. What did I do?

As the year progressed I found myself carrying speed strips more often and speed loaders less and less, especially the N-Frame ones that were the main problem. Eventually I got lazy and just started carrying an extra J-Frame revolver which, although heavier, didn't seem as bothersome as an N-Frame speed loader rolling around in my pocket.

Now that the year has ended I don't know if I will continue the experiment. I have several good carry autos that I would like to start using. The one thing I do know for sure is that if I carry revolver speed loaders again it will have to be with a good holder attached to the belt. Trying to carry them any other way is just too much of a headache.
Posted by Wilson at 7:00 AM 3 comments:
Email ThisBlogThis!Share to TwitterShare to FacebookShare to Pinterest
Labels: Concealed Carry, Revolvers, Smith and Wesson Revolvers
Newer Posts Older Posts Home
Subscribe to: Posts (Atom)