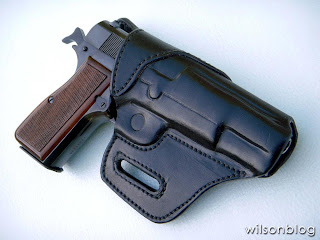 Yesterday I received in the mail a new holster for my Browning Hi Power. I was so impressed I thought to review it here. The holster was made by Land Shark Leather and is exceptionally done. Rob runs Land Shark Leather as a one man operation. He makes no claim that his holsters are better than the competition but that he produces a "quality product at a reasonable price." I wholeheartedly agree. I have bought a lot of holsters and seen many more over the last 20+ years. Rob's holsters are top notch and well worth the modest prices he is asking. I ordered his "Tiger Shark" model and couldn't be happier with it. It's made of premium cowhide and precisely molded for the gun. My Browning is a perfect fit. The workmanship is outstanding and extra features like the body shield are a nice touch too. I ordered the plain model because I'm a "basic black" kind of guy but he does offer his holsters in different colors and some more exotic materials if that is what you are looking for. If you are in the market for a new holster send Rob an email and see what he can do for you. Land Shark leather - highly recommended!
Posted by Wilson at 9:00 AM No comments:
Email ThisBlogThis!Share to TwitterShare to FacebookShare to Pinterest
Labels: Gun Miscellaneous, Product Reviews, Semi-Auto Pistols 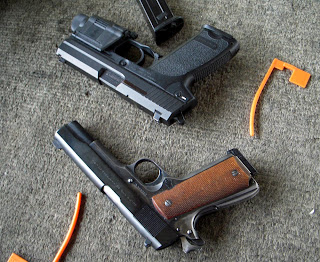 I went to the shooting range this morning. The weather was cool and the sky overcast. All in all, a nice day to go to the range.

Today I took .45 pistols again, like most every time so far this year. Once more I brought my main carry gun, the Colt. I try and take at least one of my carry guns with me whenever I go, even only putting a magazine or two through it is better than nothing.

I also brought my .45 USP. It's my house gun and it occurred to me that although I've shot it numerous times I have never fired it with the flashlight attached, like it sits next to my bed.

Both guns ran flawlessly. The USP even gulped down some old semi-wadcutter target loads I had on hand. The USP has never failed me once. Not through thousands of rounds of different bullet types, ages and manufacturers. It is one of the most reliable pistols I have ever owned.

But the main purpose of the day was seeing if the HK's attached flashlight affected the gun's performance in any way. I couldn't distinguish any significant difference. The gun balance has been changed slightly but accuracy and reliability were the same. Having more weight under the barrel might have marginally reduced felt recoil but to be honest the HK is very manageable to begin with. It's hard to tell if there really was an appreciable difference.

But it was a good morning shooting anyway.
Posted by Wilson at 4:59 PM No comments:
Email ThisBlogThis!Share to TwitterShare to FacebookShare to Pinterest
Labels: 1911, Colt, Concealed Carry, Gone Shooting, Heckler and Koch, Semi-Auto Pistols 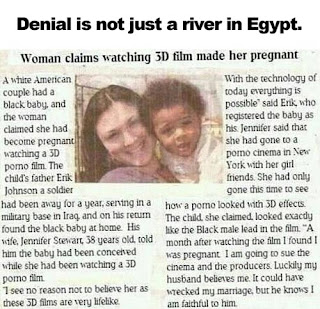 Posted by Wilson at 8:44 AM 3 comments:
Email ThisBlogThis!Share to TwitterShare to FacebookShare to Pinterest
Labels: Funnies

Does your local shooting range have its own reality show? Mine does. I've been going there for over twenty years now and I can't say there's much "reality" in the program. Or at least none I've ever witnessed. But it's not too bad. If you keep your expectations low, if seeing things shot and blown up will make you happy, you might just like it. HERE is the premiere episode.
Posted by Wilson at 10:42 AM No comments:
Email ThisBlogThis!Share to TwitterShare to FacebookShare to Pinterest
Labels: Gone Shooting, Gun Miscellaneous

One thing that could save us (that will never happen)

Since it's April the 15th once more and I just finished writing a big check to the FEDs I thought I would mention again my theory on paying taxes by payroll deduction. If we could somehow change it back to where every taxpayer had to pay their taxes at the end of the year as one big check we could turn this country around. Once the average American could see right in front of their eyes the actual, total amount being taken from them and squandered away by our "representatives" we would have major reform in this country, if not bloody revolution. Unfortunately, that is never going to happen, it is here to stay. Whoever thought up automatic payroll tax deductions was an evil genius; I'm talking James Bond level evil genius. HERE are some more interesting tax tidbits for you to nibble on. Have a happy tax day!
Posted by Wilson at 8:12 AM 1 comment:
Email ThisBlogThis!Share to TwitterShare to FacebookShare to Pinterest
Labels: Politics, The Worst

Today is also Buy A Gun day but since I've bought two revolvers and a .45 already this year I felt that was enough. If you've bought a gun recently I would be glad to hear about it though.
Posted by Wilson at 8:09 AM No comments:
Email ThisBlogThis!Share to TwitterShare to FacebookShare to Pinterest
Labels: Gun Miscellaneous 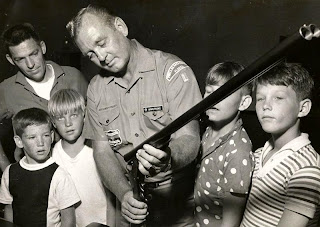 "William Armstrong (The Boy Scout instructor) giving tips at the YMCA Boy Scout safety clinic." 5/27/67
Posted by Wilson at 6:00 AM No comments:
Email ThisBlogThis!Share to TwitterShare to FacebookShare to Pinterest
Labels: People With Guns, Photography - All, Shotguns 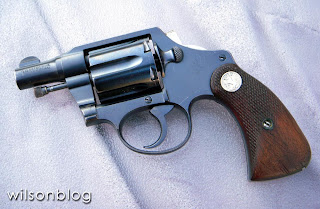 Earlier this year, while everyone was scrambling to find ARs and magazines, I stayed on the sidelines. I did spend some more on SCAR mags but otherwise sat this current madness out. I have nearly everything that I need so I wasn't looking for much. I did find this little gem at a great price back in February. I couldn't turn it down.

It's a 1931 vintage Colt Detective Model in .38 Special. I don't know its history but some past owner knew their guns, and knew exactly what they wanted in a carry gun.

The hammer spur has been removed so it won't snag on clothing but the top of the hammer has been checkered so you can still cock it single action if you want to. Originally this revolver had a square butt grip but the back has been rounded into an almost bird's head shape. The bottom halves of the grips have also been ground down. When new they flared out at the bottom now they gently roll back towards the frame. They feel great in your hand. Of course the action is smooth a silk.

I think in the next few months I'll have to get out all my old .38s and make a day of it.
Posted by Wilson at 10:29 AM 4 comments:
Email ThisBlogThis!Share to TwitterShare to FacebookShare to Pinterest
Labels: Colt, From the vault, Revolvers 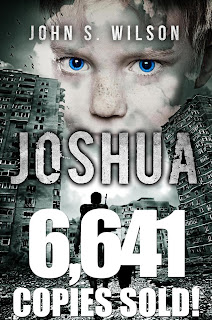 Well, it has been one year since my first novel Joshua was published. To date it has sold 6,641 copies, several hundred more were borrowed from Amazon's lending library, and 24,783 given away free during a recent 5 day promotion!

On Kindle it went to the number one position in Men's Adventure category and the top ten in Action & Adventure. Now, after my recent promotion it is back in the charts again and currently has a 4.3 star rating (out of 5) on Amazon.

All in all, not bad for a story that nearly didn't get started.

I had the initial concept for Joshua several years ago. I thought it was a great idea but never really got past the "working on it in my head" stage. I never wrote anything, except for some websites and blogs, what did I know about writing fiction? I kicked the idea around awhile but it remained inside me, unfinished. I didn't think it could get worse but it did. Later on I found that my idea was similar to a very famous book, although somehow I had managed to never hear about it. At that point Joshua nearly died, I knew it would be considered by some a "rip-off" of it, or at least unfairly compared to it.

Eventually, in the summer of '10 I decided to just do it. I sat down at my computer one day and began. The idea I had in my head for so long had to come out. From the first I thought what I was writing was good, but what did I know? Maybe I was deluding myself. After a while I scrounged up enough courage to post it on my site as a serial. Honestly I was quite nervous; I didn't know what was going to happen. I was halfway expecting readers demand that I pull my story because it was stinking up the internetz.

But the opposite happened. Readers started telling me it was good. They said write more! Finally, with enough encouragement I thought that maybe this could eventually be a "real" book. I started working towards that goal.

Now here I am a year later. My second novel has just been published and I am about to start a third. All because of a simple little idea that kept nagging at my mind and some good people that encouraged me to finish it. Thanks.
Posted by Wilson at 5:00 PM 4 comments:
Email ThisBlogThis!Share to TwitterShare to FacebookShare to Pinterest
Labels: My Fiction
Newer Posts Older Posts Home
Subscribe to: Posts (Atom)