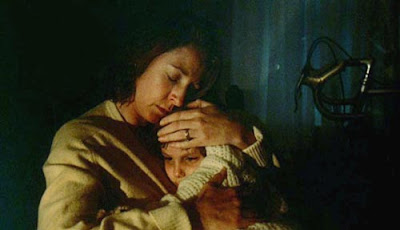 It's been over twenty five years since I watched Testament (1983) so when I picked it up recently on DVD I had forgot just how truly awful this movie is, not awful bad, awful dreadful. Testament is actually a great film and you will find yourself deeply moved by its simple story. The story of a loving mother (Jane Alexander) and her efforts to keep her family together and alive after a nuclear war. In the film her small community is downwind of a large city that was hit with the bomb. The father leaves for work the morning of the attack and never returns and the mother is left to care for her family alone. Their small town was "lucky" in that they didn't experience the immediate effects of a nuclear detonation. But very soon the residents discover that they weren't as fortunate as they thought. Now instead of a quick death they all face a slow one through radiation poisoning and starvation. This is the apocalypse in all its horrible reality without Hollywood gloss. No explosions, no exciting action, no dramatic finale, no big hero or villain, just normal people, people slowly dying and knowing that there's nothing that they can do about it but try to survive another day. This is a difficult movie to watch but it does pull off an amazing feat. This is a film that somehow manages to be both beautiful and ugly at the same time, something you wouldn't think possible. No, Testament is not a "fun" movie, but it is a movie that should be seen.
Posted by Wilson at 12:31 PM No comments:
Email ThisBlogThis!Share to TwitterShare to FacebookShare to Pinterest
Labels: Big Screen Apocalypse, Movies, TEOTWAWKI

From my own personal collection! 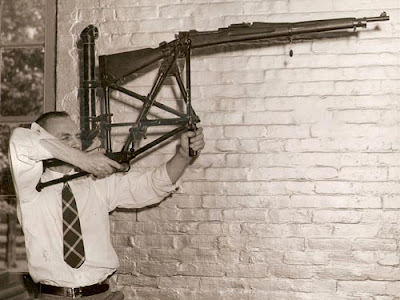 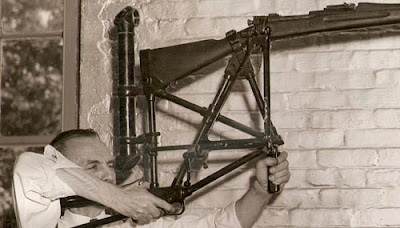 "Sniper's Delight - This intricate bit of business at the end of a 1903 Springfield rifle was designed during the World War for shooting from a trench without exposing the gunner. The rifleman sighted through a periscope. William L. Murphy, curator at the small arms museum in Springfield, Mass., demonstrates for the cameraman. Watch release date, Sunday, Sept. 29" 8/29/1940

Weapons that soldiers can use in combat while not subjecting themselves to return enemy fire is a recurring theme in small arms design. The Springfield rifle above is just another example; THIS and THIS are more recent ones. Modern technology has changed the look of the idea, and it has certainly become more practical, but the underlying goal is exactly the same as it was nearly 100 years ago.
Posted by Wilson at 7:03 AM No comments:
Email ThisBlogThis!Share to TwitterShare to FacebookShare to Pinterest
Labels: People With Guns, Photography - All, Rifles 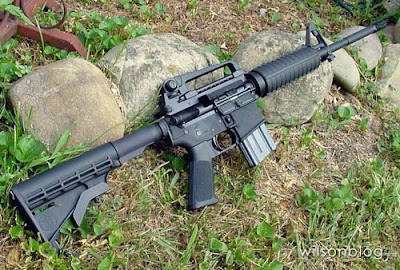 Today I went shooting with my brother and took my AR-15. This is the first chance I've had to shoot it. My brother took his M1A Scout model that he just purchased and wanted to try out too. He also set it up with a C-More sight and spent a little time dialing it in. I might end up getting a M1A similar to his. I am selling several guns on consignment to purchase a few things that I've been wanting, including a .308 rifle. When the money is here in my hands I will start seriously looking.

Today at the range I was only worried about 2 things, that the rifle's iron sights were on target and that it was reliable. It's good to go on both points. The sights were nearly dead on at 100 yards from the factory but did require a couple of right clicks to get it centered. I'm going to get a red dot sight for this but I wanted make sure of the regular sights before I did anything else. I also fired 80 rounds using 3 different brands of ammo without a malfunction. The weather was good too, all told a great morning shooting some fun guns!
Posted by Wilson at 2:01 PM 4 comments:
Email ThisBlogThis!Share to TwitterShare to FacebookShare to Pinterest
Labels: Gone Shooting, Rifles

Finally got a chance to watch KICK-ASS on DVD, the movie stars Aaron Johnson and Nicolas Cage. I had wanted to see this last spring when it originally came out but it only ran at my local theater for a week so I missed it. This is a comic book violence fantasy and if you enjoy movies like Kill Bill Volume 1 you will like this one too. I did. This movie is definitely an acquired taste and certainly not for everyone. Chloë Grace Moretz absolutely steals the show as Hit-Girl, if foul-mouthed 11-year-old assassins are your thing. And Cage, in the persona of Adam West Batman hit it right out of the park! Highly recommended!

Posted by Wilson at 8:56 AM 2 comments:
Email ThisBlogThis!Share to TwitterShare to FacebookShare to Pinterest
Labels: Movies

Photo from my first trip to New York City in 1997 (Photo from Jersey City, New Jersey)
Posted by Wilson at 6:57 AM 2 comments:
Email ThisBlogThis!Share to TwitterShare to FacebookShare to Pinterest
Labels: In Memory 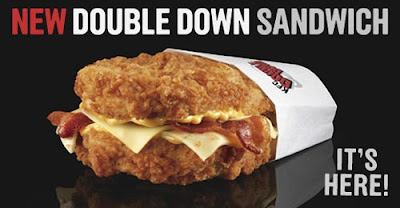 Yesterday I tried a KFC Double Down "sandwich" - one word - delicious! This last Labor Day I spent most of the afternoon laying around, doing nothing and watching the Star Wars movies on cable and found myself bombarded by commercials for this unique culinary (or is that coronary) treat. By the time Return of the Jedi was over I knew that I had to get one! That's the power of advertising! Since yesterday was also my last day of jury duty that was more than enough excuse for me to stop and buy it. Even though it blew my diet completely! In case you're one of the few that haven't heard KFC's Double Down is made using 2 fried chicken fillets, a slice each of Monterey Jack and pepper jack cheese, two slices of bacon and a special sauce. Some brilliant KFC sandwich engineer got rid of that pesky bread that was just taking up room that could be filled with more meat! They should get a Nobel prize for this (if there was any justice in the world). If you should want a (slightly) healthier Double Down they also make a version using grilled chicken fillets but I really don't see the point of it. The Double Down is a purely American invention and I can't see them selling this in Europe or anywhere else for that matter. Basically this is for American Men, who are the only ones (in large numbers) that I could see buying and enjoying this. I do have some suggestions - 1) they need to put some red meat on this, at least 1 beef patty is definitely called for and would make this perfect. 2) I know that KFC's schtick is chicken so the beef probably isn't going to happen. In that case I would suggest that the Double Down be re-wrapped in bacon and then the entire thing refried (in batter) making one large fried doughy ball of chicken/cheesy/bacon goodness! Since I'm the one that suggested it I would expect that it be named after me, the wilson-memorial-coronary-heart-disease-special does have a certain ring to it, doesn't it?
Posted by Wilson at 7:21 AM 1 comment:
Email ThisBlogThis!Share to TwitterShare to FacebookShare to Pinterest
Labels: Odds and Ends, WHAT THE

I really haven't been blogging very much in the last several weeks. There are a couple of reasons for that, one of the reasons was my 2 week stint on jury duty that just ended today. I spent most of my time sitting around, bored and waiting for my number to come up. The only real case that I had was a eminent domain trial that involved the government at 3 different levels, local, state and federal. It was a really convoluted mess with the city government managing highway construction that the state highway board had final say over and was funded with federal money. Like I said a big mess with one lone landowner stuck in the middle of this nightmare. I thought that I knew how bad our government was but it turns out I only had a small idea. We are so screwed...
Posted by Wilson at 6:31 PM No comments:
Email ThisBlogThis!Share to TwitterShare to FacebookShare to Pinterest
Labels: Blogging, Odds and Ends 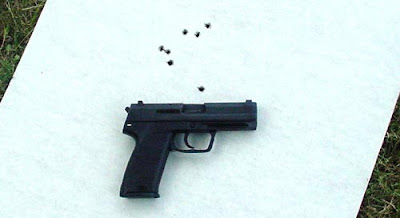 It has been over 2 months since I've been shooting and I couldn't stand it any longer. So today I took my H&K USP .45 and got some close range practice in. Nearly all my shooting this time was with my weak hand and at a range of 7 yards (21ft). My best group of the day had a 3-½ inch spread. I was shooting tighter groups but every single one had a flyer that opened it up some. I definitely need more weak hand practice. Right now I am using the USP as my "House" gun but I believe I'll start carrying it some this winter. I like this pistol more every time that I shoot it.
Posted by Wilson at 3:59 PM No comments:
Email ThisBlogThis!Share to TwitterShare to FacebookShare to Pinterest
Labels: Gone Shooting, Heckler and Koch, Semi-Auto Pistols
Newer Posts Older Posts Home
Subscribe to: Posts (Atom)