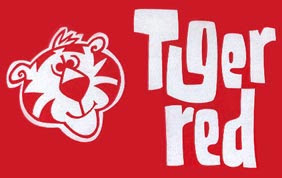 The following story originally appeared on my first website, jwilsonsworld, on 8/14/2006.

Tiger Red® vs. Big Red®: The red soda wars. Wow, as a kid I lived on this stuff, I don't think there was ever anything more satisfying than one of these served ice cold on a hot summer day. Of course there have been other red sodas on the market over the years, but here in my small corner of the world these were the two big players. Fortified with plenty of sugar, caffeine and artificial color both of these syrupy sweet, fire engine red concoctions would appeal to any red-blooded American kid and would have to be the best soda pops ever created. Both sodas had what has been variously described as a "bubble gum" or "candy" taste, or sometimes simply described as tasting "red". But whatever you wanted to call the taste they were wonderful anytime you could get them. Both were great, although as a boy my personal preference was definitely for Tiger Red, it had to my fading middle-aged memory, a more "bubble gummy" taste and cooler more kid-appealing packaging. Well we know who eventually won this war; Tiger Red went the way of the dodo, becoming only a small footnote in the history of soda pop. Its main competitor Big Red still survives to this day though, the packaging has changed over the years but it still has that great "red" taste. Although I rarely have soft drinks anymore I will on occasion indulge with a Big Red, still just as refreshing on a hot day as it ever was. 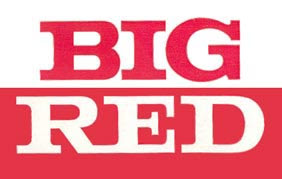 Posted by Wilson at 11:34 AM
Email ThisBlogThis!Share to TwitterShare to FacebookShare to Pinterest
Labels: Livin' in the 70s

Your post says the 70s, but my Tiger Red days were a couple of years earlier. It was so good! Tiger Red was the reddest red ever, and it had a bite...a little burn going down. One of my older brothers told me it would put hair on my chest, and I almost gave it up until he explained that referred to the bite ;-)

Nothing like it on those hot summer days. We'd buy it in icy glass bottles at the Key Market, down it where we stood, then turn in the bottles for refunds.

Was it a victim of the red dye 32 panic?

If you ever hear of it for sale anywhere, send out a heads up! Thanks for the memories!

No, the red (dye) scare was years before Tiger Red met its demise. Which, from as far as I can determine was around 1982-83. Unfortunately, although us fans probably don’t want to admit it, this very special soda pop probably died the same way many do. They just didn’t sell anymore. But don’t worry my first order of business when I hit the lotto will be to buy the formula and have it in production again! I’ll send you a case.