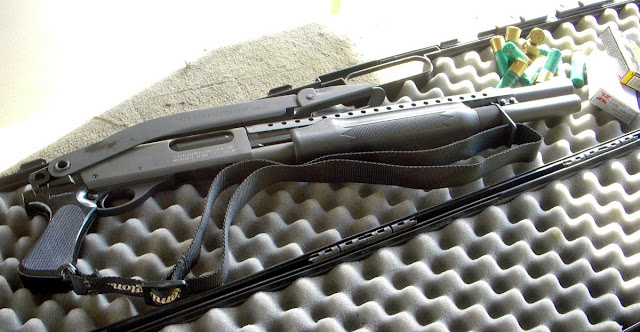 I went shooting early this AM. The temperature was 70 and the sky partially overcast, nearly a perfect day for the range! I have several items on my gun "to do" list and today it was my Remington 870's turn. I have had it a while and needed to see how it shoots and functions. I wasn't really too concerned with function. I have owned a half dozen Model 870 shotguns over the years and have yet to own a bad one. I was more concerned with the stock. It has a factory issue folding metal stock and I didn't know how unpleasant it was going to be to shoot heavy loads through it.

I arrived right as they opened with my Remington and 40 rounds of various self-defense loads, mostly 00 Buckshot. I had some regular Winchester and some Remington LE "Reduced Recoil" rounds. I also fired a box of 1 oz. Brenneke slugs through it too. As I'm sure you could guess the reduced recoil loads were the least punishing, followed by the Winchester, and finally the Brenneke slugs were the harshest. None of them, not even the slugs, were too bad though. The metal butt plate didn't even leave a mark on me. I had thought I might have to switch to a regular synthetic stock but I have no issues with this folding unit.

The Remington shot straight and functioned flawlessly, you can't ask for more than that. The sights were especially good. This shotgun was built by Scattergun Technologies (the original one in Nashville TN) and was equipped with their tall front sight and ghost ring rear. It's a good set-up that makes it lot easier to get consistent hits. I liked the sights a lot and can see why they are so popular. This one is definitely a "keeper."
Posted by Wilson at 12:00 PM
Email ThisBlogThis!Share to TwitterShare to FacebookShare to Pinterest
Labels: Gone Shooting, Shotguns

Can't go wrong with an 870. I have been eyeballing other shotguns for a while, but keep on coming back to the 870. The couple I have saw service in patrol cars - the outside isn't pretty but like new internals. That Scatter Gun Technologies model you have is a good one!

Thanks Jason! I’ve owned a half dozen 870s over the years and have yet to have a problem. Like with anything mechanical, you can wear one out or maybe get a lemon, but those are rarities!