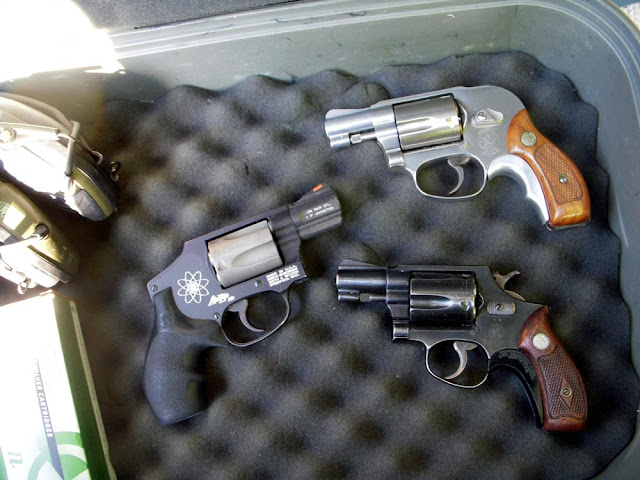 I went shooting again Monday. The weather was perfect although a little cool for May, in the 40s when I left the house.

This time I took my Smith & Wesson "J" frame revolvers with me for practice. The Bodyguard and then later the lightweight Centennial I used quite a bit for several years. The Bodyguard 649 (upper right) was actually my first carry gun and my only one up until 2000. Now I hardly use any J-Frames at all.

For the last couple of years I haven't carried them except the lightweight 342PD (left) that sometimes I keep in my pocket around the house. Occasionally I will carry it instead of a reload for my main gun.

The third J-Frame is a 1953 vintage Chiefs Special (lower right) that's had a hard life. I've never carried that one. It's mostly retired now and is a backup to my backup.

Snub-nose revolvers are probably the hardest handguns to shoot accurately and I wasn't doing too well Monday. I was barely keeping the shots in the black (5-Inch). I hadn't practiced with them in a while and it showed. I actually did best with the 342PD. It's a lightweight gun but it always been the best shooting J-Frame I've owned. All three revolvers are unmodified but the trigger on that one was a little better from the factory. I was pretty rusty with these three and no doubt need to get them back to the range soon.
Posted by Wilson at 7:00 AM
Email ThisBlogThis!Share to TwitterShare to FacebookShare to Pinterest
Labels: Gone Shooting, Revolvers, Smith and Wesson Revolvers

Yes! I loooove me some j-frames. I don't carry them all the time, anymore, but they do still get carried a good bit.

If you don't count my 3-inch j-frame, my best shooting one us my Bodyguard (a 638). Because of the 'hump' on the back of the frame, i can grab the gun slightly higher than a centennial or standard configuration j-frame, resulting in a lower perceived bore-axis. It works for me, and helps with follow ups.

I also noticed some years ago that at 25 yards and out, you can really see where your j-frame shoots. My bodyguard consistently puts bullets right of the point of aim (about 5 inches) and my wife's model 60 puts them to the left and low (about 3-4 inches). Every one of them seems to shoot to a different point of impact, and until you find it and learn that particular gun, the accuracy will give you fits!

Nice pic. Thanks for posting.

Thanks for the comments. I have to agree with you that none shoot the same, even with same barrel lengths. They are about the hardest handguns to shoot well and definitely require extra effort.