From my own personal archives! 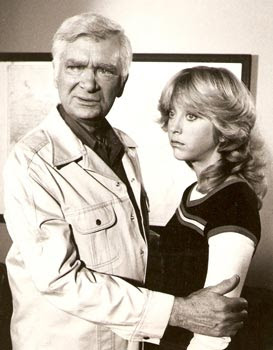 "Barnaby Jones (Buddy Ebsen) wants some straight answers from Dawn Carlson (Bonnie Ebsen, the star's daughter) whose boyfriend he suspects of having faked his death to avoid capture by the Coast Guard, in 'Barnaby Jones', Thursday, March 2 (10:00-11:00 PM, ET) on the CBS Television Network." 2/3/78

Lasting for 8 seasons (1973-1980) CBS Television's Barnaby Jones brought viewers something that we had never seen before, a milk drinking, sexagenarian, TV detective that always solved the case and got his man. Jones (Buddy Ebsen) originally came out of retirement to solve the murder of his own son and was aided by his daughter-in-law (Lee Meriwether), in later seasons his cousin "J.R." (Mark Shera) would also get into the act. Barnaby Jones with his laidback manner would lull suspects, while his keen eye and scientific mind would close the noose on any that thought they could outwit the law or escape justice. Produced by Quinn Martin Productions, who was no stranger to TV success in the 1960's and 70's, this memorable, popular and highly entertaining series would prove you didn't need to be a hard drinking, hard living, tough guy TV detective to get the job done. With the help of a huge assortment of special guest stars over the years and a great television opening sequence and theme song, Barnaby Jones would become one of the iconic TV detective shows for an entire decade.
Posted by Wilson at 10:36 AM
Email ThisBlogThis!Share to TwitterShare to FacebookShare to Pinterest
Labels: Livin' in the 70s, My TV Generation, Retro Pop (Culture)