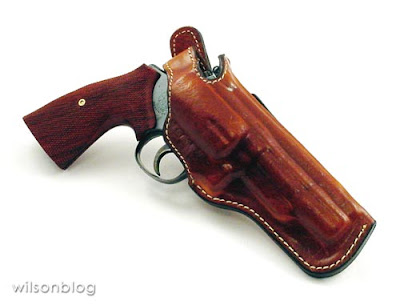 I've had a few email questions about my How I carry my "N" Frame Smith & Wesson revolvers post from last week. So I thought I would answer them here all at once.

The '56 is actually the revolver that I usually carry when I do carry an N Frame, and no it's not nearly as nice as it looks in the photos. It has a lot of finish wear already so I'm not very concerned about a little more. In fact all of the Smith & Wesson's shown are "shooters" and have been carried in the past.

The large target grips on the '62 were made by a gentleman in Thailand, wish I could remember his name but I know he used to sell on Gunbroker and you might still be able to find him there. The grips completely cover the frame of the gun (front and back) filling my hand quite well. I find them great for range work although they are a bit much for concealed carry (except maybe with a very heavy cover garment). The grips are well made but did require some minor fitting to make them right. In size and feel they remind me of Herrett's Jordan Trooper grips but at nearly half the price. Also, personally I like the checkering more than those I have seen on Herrett's grips.

The Hunter holster was made for a 4-Inch gun while the rest were made for 3 ½ Inch guns. Obviously the Don Hume belt slide will fit any barrel length. The DeSantis, while molded for a 3 ½ Inch barrel gun has a little extra leather on the end so you can carry a 4-Inch too. Actually I can put my 5-Inch in it and only the last ¼ inch of the barrel protrudes.

The Hunter is left over from when I carried 4-Inch N frame guns. My first N Frame carry gun was a NYSP marked Model 28. I've also owned a couple 4-Inch Model 27s. Unfortunately in a fit of stupidity I sold those guns years ago and have regretted it ever since. I did keep the holster, knowing I would probably have use for it again, someday.

And finally I had one emailer that was very concerned for me because some of my older holsters have exposed triggers. The thought being that the trigger might get caught on something and/or I might have my finger on the trigger causing an accidental discharge. First, I have absolutely zero concern about something catching the trigger and causing an AD. All my carry revolvers have between a 9-10 pound DA triggers and that's not counting the resistance on the cylinder by the holster and belt. I'm not sure I could even intentionally cause a discharge, let alone an accidental one. Second, my weak-willed trigger finger won't be having an AD because I (like hopefully every other gun owner) practice proper trigger discipline by keeping my FINGER OFF THE TRIGGER UNTIL I AM ON TARGET AND READY TO FIRE.

Till next time!
Posted by Wilson at 9:54 AM
Email ThisBlogThis!Share to TwitterShare to FacebookShare to Pinterest
Labels: Concealed Carry, Revolvers, Smith and Wesson Revolvers