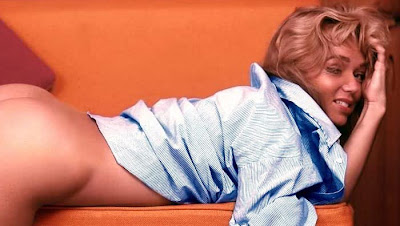 Just read today where actress and singer Yvette Vickers' body was discovered in her home back on April 27th. She would have been 83 this coming August. Her body was described as "mummified" and evidently she could have been dead for nearly a year before being discovered. Yvette never was a big star but I loved those campy "B" movies she appeared in. She also held a special place in my heart for another reason (See below). I was truly shocked to read this news and I'm saddened that anyone would have to die like this. It's just hard to believe that this lady could be dead in her house for that long and not one person, not a neighbor or even the mailman could be bothered to check in on her in all that time. Just sad.

The following tribute to Yvette was posted on my original website jwilsonsworld on 5/17/2004.

The year was 1972; my friend Bobby and I were secretly looking through his father's old copies of Playboy magazine. I opened the July 1959 issue and my eyes fell upon this provocative beauty. She was nude! Not only was she nude but she also seemed to be quite happy about it (which was completely contrary to my southern Baptist upbringing). Looking back today, her nudity seems mild, almost innocent. In these modern times you can see more nudity on prime time television, but in 1972 to a very young and impressionable boy it was rather exotic and exciting. Much later on I discovered "Miss July 1959" actually had a real name and was a real person, her name was Yvette Vickers. Yvette Vickers is a cult movie star today, best known for films like Attack of the 50 Foot Woman, Attack of the Giant Leeches, Reform School Girl and Juvenile Jungle. These movies (and Yvette Vickers' acting) are better than their titles would suggest, in fact they are really good and very entertaining. Watching these movies you can see the talent this woman has and the extra special something inside her that could have made her a really big star if someone would have given her a chance. I don't guess Hollywood really ever gave her that big chance, that's too bad for Hollywood and especially too bad for us movie fans, I think she would have been great.

Thank you Yvette, wherever you are, for giving a little boy his first look at a "real" naked lady and a grown man a very fond childhood memory.
Posted by Wilson at 11:44 AM
Email ThisBlogThis!Share to TwitterShare to FacebookShare to Pinterest
Labels: Hollywood Remembered, The Worst

That is sad. She was a perfect little tramp in Attack of the 50 Foot Woman. Love that movie.

I could have sworn I already posted a comment on this. Maybe I’m going senile early. Anyway, I loved her in Attack of the 50ft Woman. Now that’s a “B” movie!

You might not be crazy after all. Blogger was having problems for a few days and may have lost your original comments.