Classic TV Collection - From my own personal archives! 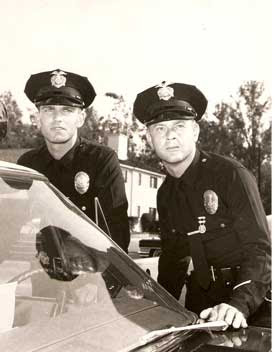 "ACTION IN 'ADAM-12' PREMIERE - Martin Milner (right), as senior officer Pete Malloy, and Kent McCord as his rookie partner Jim Reed capture two robbery suspects and save a child's life with mouth-to-mouth resuscitation, in 'Log-One', premiere episode of 'Adam-12', to be colorcast on the NBC Television Network Saturday, Sept. 21 (7:30-8 p.m. NYT). 'Adam-12' is the designation of the patrol car to which the two officers are assigned. (8/16/68)"

Patrolling the streets of Los Angeles for seven seasons and 175 episodes NBC's Adam-12 was one of the first shows of its kind. Attempting to show the day to day work life or average police officers, the stars of this program portrayed the deadly seriousness as well as the sometimes absurd comic situations that were part of the normal police officer's work day. Developed and produced my Jack Webb, who had major success with another police program, Dragnet, Webb insisted that his new cop show be as realistic as possible. Adam-12 actually drew from real case files of the L.A.P.D and every effort was made to get as many of the factual details and procedures of police work correct, including (but not limited to) using the right patrol cars and even the exact same issued handguns as the Los Angeles Police Department. Today Adam-12 can be remembered as a true innovator in this genre, showing cops not as superheroes but as real men and women working every day at a difficult and sometimes thankless job due mainly to their dedication and professionalism.
Posted by Wilson at 8:02 AM
Email ThisBlogThis!Share to TwitterShare to FacebookShare to Pinterest
Labels: My TV Generation, Retro Pop (Culture), wilsonblogclassic