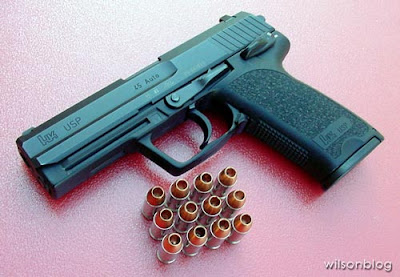 Went shooting today, almost didn't. It has been raining all weekend and the gun range that I go to was a muddy mess. Everything was soaked, even the cardboard targets were droopy with water. I had to take two used ones and tape them together to get them to stand up. Like I said it was wet and messy and I almost didn't go, but because I didn't get to go shooting the entire month of April (also because of continual rain) I decided that I was going today no matter what. And that's what I did.

The only gun taken today was my HK USP .45, which I purchased late last year. This is the third time that I have shot this pistol. Counting today's range session I have put 350 rounds thru it including 50 rounds from my precious hollow point ammunition stockpile. To date, zero malfunctions. Today I shot from a Weaver stance and decided to shoot a little bit further out than I normally do, 50ft. I was able to keep all my shots on the 8-Inch EZ See targets but it took some effort (okay, 3 or 4 shots were right on the edge). Once again the gun functioned flawlessly. I certainly have nothing bad to say about this handgun. As a purely functional tool it has proven to be an accurate and trustworthy addition to my collection. It has performed so well that I am even considering putting it in my regular carry gun rotation.

My only complaint would have to be the cost. Even though I got this gun at a bargain price I knew when I bought it that nothing HK produces is inexpensive, including accessories. I also know how I am. If I kept this pistol, especially if I intended to use it for self-defense, that I would have to go out and buy magazines and other accessories for it.

And that's the dilemma. I really like this gun, and it has certainly proven itself. But in the last year I have made a concerted effort to standardize my guns, not just in ammunition but also in parts, magazines etc. To keep this HK means buying a whole new set of accessories that won't work on anything else. Would probably end up spending as much as the gun itself. The biggest cost factor being the magazines that will set me back about $50 each. Since I like to have at least 5-6 for any semi-auto pistol that I own just magazines will set me back to the tune of $250-300 dollars. Aftermarket mags are marginal at best but there is another option of using the factory 10 shot magazines, which can be picked up at the more reasonable price of about $30 each. To be honest I don't like that idea much either, seems like I would be giving up some of the potential of the gun. One of the things that I initially liked about the HK (compared to my Colt) was that it weighed slightly less but held 4 extra rounds, 12 compared to 8. I hate giving up some of that advantage.

But even with all of this back and forth on my part I must admit it's only the extra cost that makes me hesitate. I have absolutely no other complaints about this gun. This HK pistol has more than proven itself to be reliable and useful weapon that will not only protect my life but should also give me years of trouble free service.

So the final decision is - It's a keeper.

Maybe I could find a dealer that sells mags on the layaway plan... 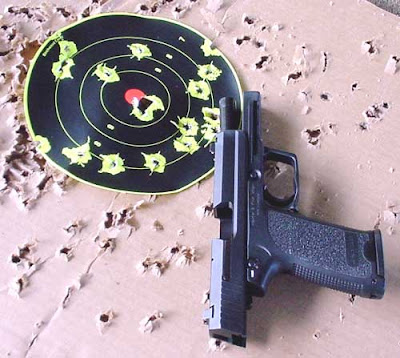 Posted by Wilson at 11:02 AM
Email ThisBlogThis!Share to TwitterShare to FacebookShare to Pinterest
Labels: Gone Shooting, Heckler and Koch, Semi-Auto Pistols

I toyed with the HK USP in the mid-90's and liked it for all of the reasons you cite. I also decided against it for the reasons you give, and was frankly surprised at your conclusion.

Yes it was a hard decision for me given the points that I already mentioned. The gun is huge! For concealed carry it is really pushing the limits. But ultimately, given that I shoot it well, that it is very reliable and I already owned it, I decided to keep it...

Hope you find those elusive "HK magazines-on-sale".
Not sure about leather for the HK either. Good luck...

CDNN has them right now (finger rest type) for 44.99. I might buy a couple. I am also not in a hurry, I will wait and see if I can't find a deal on Gunbroker or some of the gun forums I visit for some lightly used ones at a better price. As for holsters I suspect I will have to special order something from Milt Sparks.

The folks at Sparks are great! I need to order some stuff in the next couple of weeks to have it time for a class in Sept.

Yes they are great! Unfortunately they do take a while. My last order took them 7 months to complete. If you are ordering, remember they don’t start taking orders until the 1st Mon of the month and usually they have their quota filled within the first few days...