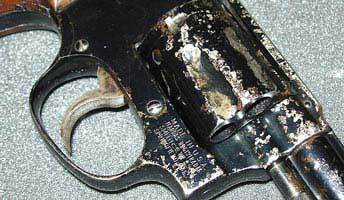 The following story originally appeared on my first website, jwilsonsworld, on 9/14/2007.

The author (me) has softened on his opinions since originally writing this in '07. Since then I have bought a few more guns at pawnshops, no "deals" but certainly some fair priced guns for their condition.

Lots to see at pawnshops, just not much to buy...

I hate pawnshops; I want everyone to know that fact without a doubt. In over 15 years of looking I've only found one gun that I had to buy at a pawnshop. I have never seen a "deal" at a pawnshop; at most I have seen some guns that were at market value.

Mostly what I have seen at pawnshops are cheap junk guns. Lots and lots of cheap junk guns, what gun haters like to call "Saturday Night Specials". Low priced guns that personally I would be ashamed to sell to some low-income person that was buying it for self-protection. I don't think I would last too long as a pawnshop gun salesman because my conscience would force me to tell these poor people the truth. "Okay, I will sell you this (insert name of cheap pot metal gun here) but I must tell you that this pistol is a piece of junk and when you truly need it this thing will probably let you down and get you killed". No, don't think I could make a living as a pawnshop gun salesman.

What else have I seen at pawnshops? Lots of well worn, or often times abused "name" guns that have seen a better day and are way overpriced for the condition that they are in. I've lost count of the abused/neglected Colts, Smith & Wessons, Rugers, Winchesters, Brownings (and the like) hanging on a pawnshop wall or sitting in a display case practically begging "please take me home, I want to be owned by someone who really cares for guns". But I don't take them home, not because I wouldn't like to own some and give them the attention that they deserve, but because their current pawnshop owners think that they're made of gold and have priced them accordingly! Prices are always high at pawnshops, one of the shops that I go to a lot seems to have a pricing policy, blue book 100% condition plus 20%. Any "name" gun that this guy will have will follow that rule whether it's 100% or not. All of this overpricing might be okay if there was room for negotiation, but there usually isn't. The most I can normally get out of them is 5-10% off; maybe cover the state sales tax, maybe.

There is a blog that I read a lot, it's one of the few that I checkout nearly every day. I like the writer's style and he and I seem to share similar gun interests. Unlike me, he seems to have some good luck at the pawnshops; his experiences are probably the polar opposite of my own. He has even written an article on how to look for and purchase guns at a pawnshop. From what he has written he has found some interesting and fair priced (maybe even bargain priced?) guns at pawnshops. Never seen it happen, don't personally know anyone that it's happened to. Of course I don't follow his "rules" either. His biggest rule that I violate is visitation to the pawnshops, I think he goes several times a week; at most I might go twice a month. Maybe if I went and looked in the pawnshop case every day I might find some deals, but that's not really an option for me, and to be honest I don't think I could stand spending that much time in pawnshops.

So if I hate pawnshops so much why do I keep on going? Because there has been countless times where I could have almost made a deal, guns that if they were just slightly lower priced or slightly less abused the salesman and I could have come to terms. But it never has happened to me. Like some degenerate junkie gambler who knows someday he's going to hit that "big payoff", somewhere in the back of my head I have a hope that maybe someday I'll find that great pawnshop "deal". I guess that is why I hate pawnshops the most, because they keep me coming back.
Posted by Wilson at 9:45 AM
Email ThisBlogThis!Share to TwitterShare to FacebookShare to Pinterest
Labels: Gun Miscellaneous