The following story originally appeared on my first website, jwilsonsworld, on 9/23/2008.

Dirty Harry. Dirty Harry? Yes, actor Clint Eastwood's character of Dirty Harry is the reason that I bought my first Smith & Wesson Model 27 .357 Magnum, a model that I have personally owned numerous copies of over the years and the gun that is my favorite revolver ever.

It was in the early summer of 1994, I had bought my first S&W handgun about a year earlier, a model 4506 (.45 Auto) pistol and was quite happy with it. In the previous few years I had owned several auto pistols, and also a few revolvers, but had never owned a Smith & Wesson brand revolver, I decided it was about time that I got one. But what to buy? I really had no idea what I wanted; so I just kept my eyes open during my regular gun shop visits to see if there was anything that I liked. Over the weeks as I continued window shopping several different guns began to catch my eye. I began making a list of all of the models that I might like. The models 10, 13, 19 and 66 all seemed to be possibilities yet nothing so far had reached out and grabbed me, not yet anyway.

Then one day while out on my regular gun shop visitations I saw it, sitting in a glass display case was a real beauty, a near perfect copy of Dirty Harry's famous Model 29 .44 Magnum. Well not quite perfect anyway as this was actually a Model 25 chambered in .45 Colt. Even so I had to have it! The gun in its construction was beautiful, the recoil absorbing heft of the large "N" frame size, the high polish blued finish that S&W used to be famous for and hand filling oversized target stocks all conspired to make me want to buy it. All of this and within my meager price range too! I didn't know much about the caliber though having had most of my experience with .22 and .45 ACP, the .45 Colt was basically unknown to me. But when the gun shop's salesman, who evidently was as much a "gun expert" as I was, informed me that this gun could also shoot .45 auto with special clips I knew then and there that I was going to buy it.

Well it wasn't too long after getting the gun home that I discovered my "newbie" mistake, that it was not going to be shooting the more affordable .45 ACP. At that time in my local area .45 "Long" Colt ammunition could hardly be found, and when it was found it was not cheap! I didn't reload and a 20 round box of .45LC would cost you about the same as a 50 round box of .45 Auto, as I said, when you could find it. I probably should have taken my new treasure back right then and there and got a refund but I just couldn't. The beautiful design and the resultant product was just to awe inspiring to let go, not at least without something as nice to replace it with. So I began scouring the gun stores and pawnshops again, but now with a mission, to find another N frame in caliber that I could afford to shoot. After owning the Model 25 for even a short while I just knew that I had to have another large frame Smith in my collection.

Well my wait turned out to be not too long because after a few more weeks of searching I found it. Sitting in a gun shop display case was a nearly pristine Model 27-2. Its 4-inch barrel had a lighter contour than my Model 25 but they were undoubtedly "sisters", same gorgeous polished blue finish, hand filling oversized grips and that unmistakable feeling of superior Smith & Wesson quality. And now made all that much better because it fired the more affordable .357 Magnum and even the inexpensive .38 Special too! I had found another N frame S&W that I "had to have" and on this occasion my timing was perfect. You see, by now it was the mid summer of 1994 and the Clinton "crime bill" was making its way through congress. Most of the gun owners in America were scrabbling to buy up all of the guns and accessories that would shortly be declared illegal. Gun buyers were racing to buy up all of the soon to be banned high capacity guns and magazines as fast as they could at ever escalating prices before this new bill was signed into law. At that time no one had any interest in a massive 40-ounce - 6 shot revolver, not when their Glocks, Sigs, Browning Hi Powers and AR-15s were about to be declared "evil". No one had any interest in it, no one but me anyway. I was probably the only person to seriously consider purchasing that Model 27 in the weeks that it had been in that gun shop owner's display case, and I think he knew it. He might have even believed that I was the only chance he had to "unload" this gun on someone during these crazy times. The shop owner immediately saw that I was interested in the gun and took it out to let me handle it. As soon as I took hold of this masterpiece in the gun maker's art I knew that I had to have it but I tried not to show that, I tried to keep my "poker face" on. You see his asking price of $250 was just a little more than I had on me. I knew I would have to talk him down a little in price if I wanted to take the gun home that day, which I very much wanted to do. Without much prodding he came down to $220 and before I could quickly accept that nominal price he even offered to throw in a box of .357 ammo! I about tore my pant's pocket getting the money out! I think both sides of the deal went away extremely happy that day. The seller got to "unload" a gun he probably assumed would be collecting dust in his display case for quite a long time, and some "newbie" kid got just the gun he was looking for and at a nice price too! Everyone got what they wanted!

Since that time I have never been without an N frame .357 in my collection, as I said earlier it's my favorite revolver model ever. I have owned quite a few N frames over the years, mostly .357s in just about every barrel length and variation, but in other calibers as well. Now I can't even conceive of my gun collection without some large frame Smith & Wesson revolvers in it, it just doesn't seem right not to have at least one (or two or three) in my safe. And all started because of a great old action movie and a desire to have a gun just like the gun that Dirty Harry had... 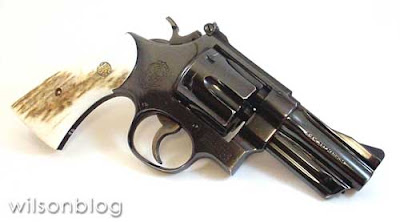 Soooo you kept the Model 25 ... right?
I came onto N-frame even later (much later) than you. I resisted several at the Collector's Show in Denver last weekend. Fair prices too...

No, I eventually sold that to buy something else, don’t even remember what… Just one of many guns I have regretted selling over the years…