Went and done it 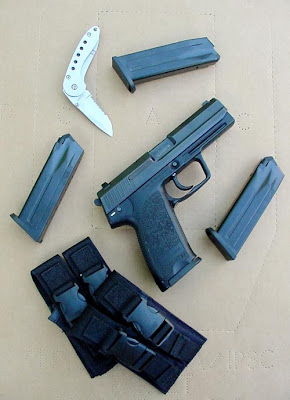 Finally broke down and bought some factory 12 round magazines for my HK USP 45. I purchased the gun late last year and it took me some time to decide that it was a "keeper". High cost of accessories being one of the issues that caused me apprehension. Since I first got the gun I have been looking for good deals on factory mags. Looking around, the best price I could find for new ones was around $50. Over the last few months I also narrowly missed a couple of opportunities to buy some lightly used magazines on gun forums I visit, but I kept looking. A couple weeks ago I checked in again at CDNN and found that they had new 12 round factory issue magazines for $44.99. Not much of a "bargain", but the cheapest I've seen (for new) since I've been looking. I went ahead and bought four, and with the one that came with it that makes five. That's enough. I won't be buying anymore new magazines for this pistol. If I find some good deals on used ones I'll pick them up, otherwise I'm thru. CDNN was running some of their internet specials that helped sweeten the deal and that was part of the reason I went ahead and bought the magazines now. I bought the four mags, they threw in two nylon mag pouches (one for each pair of mags), a cheap but serviceable folding knife, and gave me free shipping on my order to boot. As I said that was enough of an incentive to go ahead and buy them now. I certainly didn't think I was going to find new mags much cheaper than that no matter how long I looked.

For now I have decided to make the HK my "house" gun (along with a Remington 870 Police model I have). I don't know if I am going to carry concealed with it yet but I probably will. If I can carry a S&W N frame I can carry anything, and 13 rounds of .45 ACP hollowpoints makes me feel all warm and fuzzy inside. But that's a moot point for now; first I will have to find (or probably special order) a holster for it. I'm partial to Milt Sparks myself, but even if I ordered one right now I wouldn't get it to the end of the year...
Posted by Wilson at 9:09 AM
Email ThisBlogThis!Share to TwitterShare to FacebookShare to Pinterest
Labels: Gun Miscellaneous, Heckler and Koch, Knives, Semi-Auto Pistols

It'll serve you well as a house gun, especially with the rail. My XD gets downloaded to Cond III and then the light's attached when I go night-night.
Got my Model 27 back from Tedd with the Blu Magnum grips. VERY NICE.

How long did you have to wait for those grips?

Coupla months, not sure really...